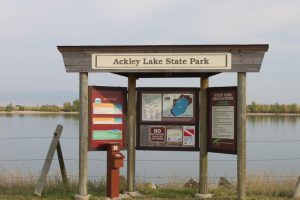 First of all, a confession.

I had never been to Ackley Lake State Park until last night. When you realize it is only 7 miles off the highway from Hobson, MT it’s hard to believe I haven’t gone before.

It was about 5:30pm last night when I was almost to Hobson coming home from a day of work in Lewistown.

I had recently visited with the new Region 4 State Park manager and made a comment that I had been to all of the state parks in Central Montana except Ackley Lake. He asked why and I couldn’t come up with a reason. At that point I decided I was going to get there!

Well, seven short and scenic miles later I pulled in to a parking area at Ackley Lake State Park.

I saw a pickup parked there, then I glanced to the south and saw three campers. Perhaps I would have someone to take a photo of instead of just some scenic shots. 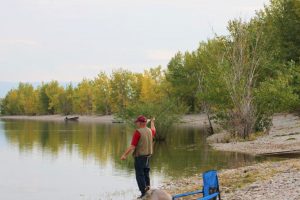 Two fishermen were casting from the shore and I started visiting with them. In a matter of 15 minutes it seemed like fish started jumping all over in the lake – in the middle, not too far from shore, truly all over! My new fishing buddies were excited and trying to cast where they saw the last fish jump.

One of the fishermen told me he was 84 years old and had recently had rotator cuff surgery. He told me he could certainly be doing better if it hadn’t been for that darn surgery!

Then, one was hooked! We all got just a little excited as the other fisherman did some well controlled reeling in, giving the fish a little line, then bringing him in bit by bit. This guy definitely knew what he was doing.

Another fisherman was in a tube where he could paddle and fish out in the middle. He caught a fish too and the excitement was contagious. 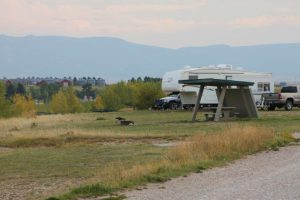 I watched as the first fish caught was weighed and measured. It was a rainbow trout and was 16.5 inches long.

Before I left Ackley Lake I walked around a bit. Campers were enjoying the great fall weather, it was so quiet you could hear a fish jump, and I was soaking up the serenity and beauty.

Ackley Lake State Park isn’t large but what a perfect setting for fishing, motorboating or camping. And, the access is incredibly convenient.

Ackley Lake is nestled right in the heart of Montana's Big Sky Country. One glimpse and you'll easily understand how the beautiful views of the surrounding Little Belt and Snowy Mountains and rich agricultural land captured the heart of the legendary Western artist, Charlie Russell, a hundred years ago.

On a warm summer day, enjoy the cool waters of Ackley Lake on Montana's open plains!

Some amenities are seasonal. Check with the park for availability.

Hours listed below are normal operating hours and may not apply when there is a special restriction or closure. Check Alerts and Closures in the tab below.

I tried to squeeze her lips more tightly, played with her tongue. The cock throbbed so nicely in my mouth. Although the bitter semen spoiled the overall impression. I was flowing with renewed vigor.

But definitely not unpleasant) Damn, I got up from this story again!) Pasha entered into the conversation. Yes, I myself have already flowed. ) Katya answered, Let's go home soon, otherwise I will explode now.

That's all. He began to move carefully. Pain before letting her go. She nodded.

There is one, but a village is a village. He also knows what I'm doing here. it taking a deep breath. Masha immediately took the penis for herself.