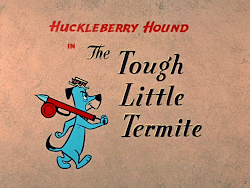 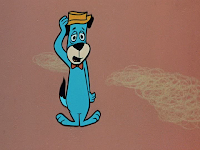 “Did you ever have one of them days, you know, when everything seemed to go wrong?” That’s what Huckleberry Hound asks the TV audience at the end of the cartoon. And since we all have, we can sympathise with poor Huck as he loses everything—all because he wants to get rid of a bothersome insect from his home.

But it’s not just any bothersome insect. It’s a termite. Sure, Porky Pig took on a termite in The Pest Who Came to Dinner (1948) with an ending that was apparently adapted by Woody Woodpecker when he battled Termites From Mars (1952). But this termite has some personality. He’s a ham. And he sings a little song. Since he’s an insect, he can only buzz, so Don Messick has him going up and down the scale, cheerfully singing “Buzz-a, buzz-a, buzz.” It’s just so silly, it makes the cartoon a winning one, even though Huck gets unmercifully picked on during the whole time. Ed Benedict designed the termite with a little zig-zag mouth. He also designed the opening shot of Huck relaxing outside his suburban home. There’s no neighbourhood, just the front of Huck’s place with a solid colour background. Even the tree next door is floating in light rose-coloured space. “This is a happy little story of a happy little house and its happy little owner,” lies the narrator as the ending is far from happy for Huckleberry Hound. But we don’t know that yet, as the narrator adds Huck doesn’t have a care in the world “except one teensy-weensy little one.” That’s the cue for the “buzz-a buzz-a” song. Huck puts his ear to a wooden support column. “Hmm. Sounds like termites. Only way to get rid of them is fight them,” Huck says to himself, forgetting he took on a mosquito in Skeeter Trouble only a few weeks earlier and lost. 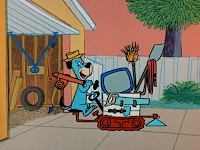 Benedict must have loved goofy contraptions. He designed that TV set-fan-stove thing that Huck used in Rustler Hustler Huck. Here, he constructs a TV-tractor-toolbox-detector or, as Huck calls it, “a do-it-yourself termite kit.” The hound puts a stethoscope to the column and hears chomping from the H-B sound effects library. Putting the TV, er, termitoscope, against the column reveals the presence of a termite. And the picture’s in colour! Not bad for 1959. Ken Muse uses six drawings on ones for the termite’s chewing. 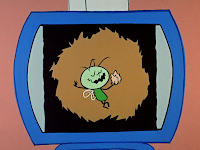 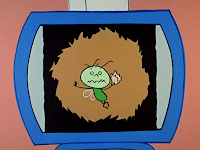 The termite notices he’s been caught on camera and hams it up. Here are a couple of poses. They’re really cute. Huck agrees. “He’s a cutie, alrighty. If you happen to like termites.” 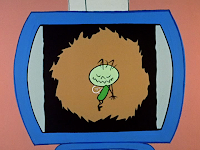 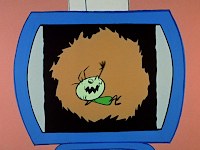 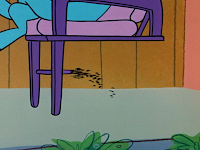 Huck saws the part of the column with the termite in it and drops it in the garbage. Now, for whatever reason (oh, right, because it’s the plot), the termite eats the block of wood and a stick in the garbage can. We don’t see any gnawing. That involves intricate animation. Instead, the wood just disappears with what I think is sawdust falling from it. The sawdust seems to evaporate into thin air. The narrator returns to remind us we’re seeing a happy and a “happy owner without a care in the world.” That’s the termite’s cue to chew up a chair Huck is resting on. “You know, something? I think that termite’s back,” Huck matter-of-factly remarks before thudding to the ground.

Huck gets out his stethoscope and hears the termite chomping inside a support column on the porch. “So long, termite,” he says as he pumps the column full of green poison. The termite was prepared. And he heckles him in a four-drawing cycle on ones, which we’ve slowed down for you below. 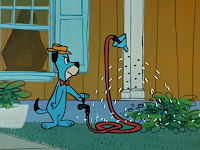 An attempt to drown the termite by drilling a hole in the column and pumping water through a funnel doesn’t work. The water comes out a bunch of termite holes. “Well, if he aint dead, he’s clean,” philosophises Huck, who peers in the hole to see the termite drying himself off with a towel. The termite takes exception to it, then resumes singing and drying off. 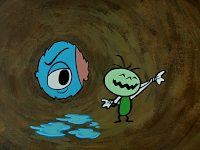 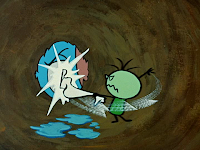 We see the camera shake and the sound of chopping. Huck is cutting down the support beam. Now the little critter follows that old cartoon law—termites eat anything and everything made of wood. First, it chomps and dissolves the axe-handle and the axe-head drops on Huck’s head. Then, it creates a hole in the house. Huck sticks some dynamite in the hole and, in the process, the flower bed above him mysteriously moves back and forth. Don’t blame the termite, blame the animation checker. 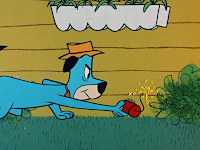 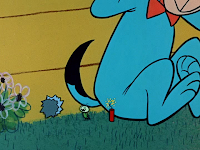 The termite chews another hole in the house and emerges with a firecracker, which he leaves next to Huck and walks back through the hole, singing his little buzz song. First the firecracker goes off with a bang, the blast knocking Huck into the flower bed, which crashes to the ground. Oh, yes, the dynamite is still going. Huck’s attempt to blow out the fuse fails, as it always does in cartoons. And where’d the hole go that the termite chewed in the house? 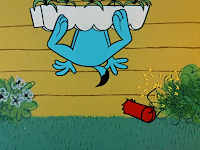 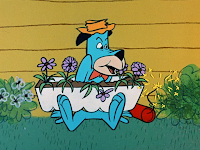 The ‘sanding’ sound used to approximate wood being devoured is heard again, and Huck rushes to the window to look inside. The termite destroys his piano (hey, what happened to the ivory keys and the metal wires?). Huck doesn’t object, but when the termite starts on his “telly-vision set,” then the bug has gone too far. Huck grabs it and puts it on the front lawn. No matter. The termite is inside the set and finishes the job. “Oh, well,” shrugs Huck. “It wasn’t working anyhow.” 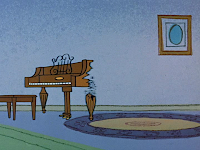 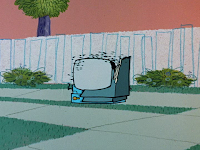 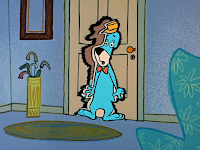 The start of Jack Shaindlin’s On the Run signals the climax of the cartoon. And once again, Hanna and Barbera cop an idea from ex-MGM stablemate Tex Avery—someone tries to escape their pursuer but the pursuer is always there. Like with Avery’s wolf in Dumb Hounded (1943), the modes of escape get bigger and bigger for Huck but to no avail. Unfortunately, there isn’t the quickening pace and music of the Avery cartoons which (with the growingly outrageous takes) add to the gag. First, the termite chomps around Huck’s outline against the door. Huck tries to get away in a car but the termite eats that, too (it’s a woody station wagon). To the airport Huck goes and jumps in a small plane. But the termite is there again, devouring everything including the propeller. “Shucks,” says a startled Huck to the camera. “I thought termites only ett wood.” Afraid not, Huck. Cartoon law says otherwise. 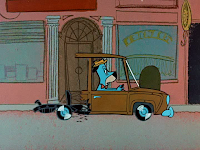 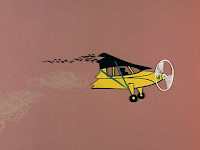 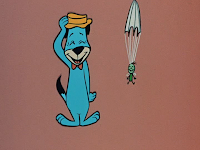 Down drops Huck and, as cartoon law also has it, the termite catches up him. “If I gotta go, at least I’m taking that termite with me,” chuckles Huck. Afraid not again. The termite sprouts a parachute and as Huck plummets and the termite sings his happy buzz song as he floats to earth and the camera fades.

If air dates are an indication, this is the final Huckleberry Hound cartoon that Charlie Shows worked on before waving goodbye like our one-shot termite. Huck survived his drop from the sky to begin the 1959-60 season with Warren Foster writing most of his material. Foster made Huck a little stupider at times (Huck’s Hack, Cop and Saucer) but kept him happy-go-lucky, even buoyant, much like he was in Lion-Hearted Huck.

A couple of background songs get a repeat in the cartoon besides On the Run. Geordie Hormel’s Light Eerie makes two appearances (once with Clementine overtop of it) and twice we hear a circus-sounding cue of Lou De Francesco’s from the Sam Fox library.

For other uses of "Termite", see Termite (disambiguation).

Termites from Mars is the 44th animated cartoonshort subject in the Woody Woodpecker series. Released theatrically on December 8, 1952, the film was produced by Walter Lantz Productions and distributed by Universal International.[1]

An astronomer, searching the heavens with his telescope, suddenly sees a squadron of spaceships emerging from the planet Mars that are heading directly toward the Earth. He spreads the news, and in no time, the alarm is being sounded by wireless, telegraph, radio and TV, alerting the whole nation of threatened invasion. Meanwhile, Woody's busy cleaning up his apartment in the trunk of a tree while watching his TV set. Suddenly, a Walter Winchell-type announcer interrupts the program to announce to the ships at sea and all people everywhere that termites from Mars have invaded Earth. The announcer states that the ships are heading for the forests.

At the base of the tree in which Woody lives, a ship comes to rest, and out come termites. Woody closes all of the doors and windows. When he cautiously opens one window, the termites swam into his apartment and begin their work of destruction. Before you know it, the Martian invaders are eating up everything in sight. Every piece of furniture disappears; only the food remains, which the termites devour. Woody endeavors to fight them with a blowtorch, but the space gun is the superior weapon, and Woody's thwarted in every manner.

Finally, in an office, where the termites have destroyed all but the glass top of the desk, Woody discovers a termite chewing on Scotch tape, in which the termite becomes all fouled up. Woody gets a bright idea, grabs the roll of tape and holds it up. In no time, the termites, as well as the spaceships, are stuck to the tape. He spreads the tape throughout the forest, thus turning the tables on the termites, saving the day and winning the battle.

At the finish of the picture, Woody opens up his own business: a termite control company. Woody also has the termites doing practical things. He sells the termites as “Little Wonder Termite Tools,” to be used as can and bottle openers, pencil sharpeners, record needles, scissors, mousetraps, etc.- while he sits relaxed at a desk directing their endeavors.

Well, sunshine, Nadya said, Almost more than half is in you. How are you feeling. Should I continue or will it be enough. " I'm excited her voice, but in the following seconds, when the pain from the blows spread to all the nerve centers, she made up for. Lost time.

Silence. He looked into the next room. There is a kitchen. Eyes, probably, lit up at the sight of the refrigerator, rushed to him. Apparently, no one is home.

The door swung open. The Slytherins jumped back in time. The shaking Slughorn left the office and said as he walked, Okay, Mr. Malfoy. Do what you want, but on your own responsibility.