Section of Interstate Highway in Pennsylvania

Interstate 81 (I-81) is an 854.89-mile-long (1,375.81 km) north–south Interstate Highway, stretching from Dandridge, Tennessee to Fisher's Landing, New York at the United States/Canadian border. In the state of Pennsylvania, I-81 runs for 232.63 miles (374.38 km) from the Marylandstate line near Greencastle to the New Yorkstate line near Hallstead and is called the American Legion Memorial Highway. It is the longest north–south Interstate in Pennsylvania.[2]

I-81 enters Pennsylvania at the Maryland state line about 13 miles (21 km) south of Chambersburg; it also has its first exit at the state line, junctioning with Pennsylvania Route 163 there. In Chambersburg at exit 16, it meets U.S. Route 30 (the Chambersburg Pike to Gettysburg). About a mile north of Carlisle at exit 52, it meets U.S. Route 11, which takes passengers to the Pennsylvania Turnpike/ Interstate 76 (halfway between Philadelphia and Pittsburgh), since I-81 has no direct interchange with I-76. The stretch of US 11 connecting I-81 to I-76 is known locally as the "Miracle Mile" since it contains plenty of traveler services including restaurants, gas stations, lodging, truck stops, shops, etc.[3] From here, I-81 travels in an almost precisely east–west direction for the next 37 miles (until exit 89). At exit 59, it has an interchange with the western terminus of Pennsylvania Route 581. I-81 becomes the Capital Beltway from exit 59 to exit 70. As passengers approach exit 67, a major complex interchange is seen. The interchange consists of U.S. Route 22 and U.S. Route 322; U.S. Route 322 merges with Interstate 81. Exit 70 is the eastern terminus of the US 322 concurrency and the northern terminus of Interstate 83, and is located in Colonial Park. For the entire segment between the Mason–Dixon line and Interstate 78, I-81 runs through the Great Valley. North of Harrisburg between Interstate 83/U.S. Route 322 and Interstate 78, the highway passes near Hershey and Fort Indiantown Gap.

I-81 northbound north of Exit 134 in Delano Township 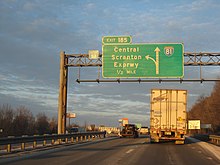 A toll highway along the present-day I-81 corridor through Pennsylvania was planned in the 1950s. The section from Scranton to the New York State line was planned as a continuation of the Northeast Extension of the Pennsylvania Turnpike. A new extension of the turnpike between Harrisburg and Scranton was also proposed. After the Federal Aid Highway Act of 1956 was passed, plans were changed to build a freeway rather than a toll road. The first section to be built ran from PA 347 in Dunmore to US 11 in northern Scranton, this section opening in 1960. All of I-81 in Pennsylvania was completed by the 1970s. Construction cost nearly $443 million.[2]

On May 9, 2013, a tanker crashed and caught fire at the interchange between I-81 and US 22/US 322 in Harrisburg. The fire damaged the bridges carrying westbound US 22/US 322 and a ramp over I-81. At least one of those bridges, carrying US 22 eastbound over I-81 and several ramps, and possibly another, the ramp carrying traffic from I-81 northbound to US 22/US 322 westbound, would have to be demolished and replaced. The fire resulted in about ten miles of I-81 being closed in both directions, with traffic being diverted along the southern portion of the Capital Beltway.[4][5] The highway would not be fully reopened to traffic until the evening of May 13.[6]

On April 28, 2016, plans were announced for a Scranton Beltway to use the Pennsylvania Turnpike Northeast Extension (I-476) as a bypass for I-81 around the heavily congested segment through Scranton and its suburbs. The turnpike between the two I-81 interchanges carries an average of 10,000 vehicles per day vs. 80,000[7] on the parallel segment of I-81. This project will build two high-speed connections between I-476 and I-81: one south of Scranton in Dupont and one north of Scranton in South Abington Township. Tolls on the connections will be paid with E-ZPass or toll-by-plate. Construction on this project, which is expected to cost $160 million, could begin as soon as 2021.[8]

On October 24, 2018, PennDOT released their plans for a new exit 12 on I-81, at Guilford Springs Road, estimated to cost around $23 million.[9] The purpose for the exit is to improve access for trucks to the various distribution warehouses south of Chambersburg, such as Target.[10] As such, Guilford Springs Road will be widened to three lanes as a part of this project. PennDOT has started obtaining environmental clearances and will start to seek rights of way in 2020 from approximately 7-10 properties. PennDOT will look at bids for construction starting in 2023.[9]

KML is from Wikidata

Interstate 81 (I-81) is a north–south (physically northeast–southwest) Interstate Highway in the eastern part of the United States. Its southern terminus is at I-40 in Dandridge, Tennessee; its northern terminus is on Wellesley Island at the Canadian border, where the Thousand Islands Bridge connects it to Highway 401, the main Ontario freeway connecting Detroit via Toronto to Montreal. The major metropolitan areas that I-81 connects to include the Tri-Cities of Tennessee, Roanoke in Virginia, Harrisburg and the Wyoming Valley in Pennsylvania and Syracuse in New York.

I-81 largely traces the paths created down the length of the Appalachian Mountains through the Great Appalachian Valley by migrating animals, American Indians, and early settlers. It also follows a major corridor for troop movements during the Civil War.[2] These trails and roadways gradually evolved into U.S. Route 11 (US 11); I-81 parallels much of the older US 11.[3] Being mostly rural, it is heavily used as a trucking corridor, and is often used as a bypass of busier Interstates to the east such as I-95. For this reason, it is also used heavily by drug and human traffickers, as it is less monitored by law enforcement than I-95. This led to the FBI forming a task force to combat the issue in 2017.[4][5]

The Interstate 81 Corridor Coalition, a six-state coalition, was organized to handle issues along I-81, such as truck traffic and air pollution; the commission meets annually.[6] I-81 is part of the fastest route between the capital of the United States (Washington, D.C.) and the capitals of both Canada (Ottawa) and Mexico (Mexico City).[7][8]

I-81 is part of the National Highway System, a network of highways that are considered essential to the country's economy, defense, and mobility by the Federal Highway Administration.[9]

I-81 begins in Tennessee at I-40 in Dandridge, a route that connects to Knoxville to the west and Asheville to the east. I-81 meets Interstate 26 and U.S. Route 23, which go to Kingsport and Johnson City. At mile marker 75, I-81 leaves Tennessee and enters Virginia.

I-81 in Virginia is largely a rural route with brief concurrencies with I-77 and I-64. The route parallels the Appalachian Mountains for much of its route through Tennessee and Virginia, serving such cities as the twin cities of Bristol, Tennessee, and Bristol, Virginia, Wytheville, Roanoke, Christiansburg, Lexington, Staunton, Harrisonburg, and Winchester. In Harrisonburg, I-81 cuts through James Madison University.[10] It parallels its older counterpart, U.S. Route 11, for its entire length in Virginia.[11]

I-81 briefly enters the Eastern Panhandle of West Virginia for about 26 miles (42 km), serving the city of Martinsburg. The entire routing is in Berkeley County and serves the Eastern WV Regional Airport. The West Virginia segment was completed in 1966 and there have been no realignments since. West Virginia is currently widening I-81 to six lanes from Martinsburg north to exit 23 (US 11) connecting West Virginia and Maryland.

In Maryland, the Interstate highway runs 12.08 miles (19.44 km) from the West Virginia state line at the Potomac River in Williamsport north to the Pennsylvania state line near Maugansville. I-81 is the primary north–south Interstate highway in Washington County, connecting Hagerstown with Chambersburg and Harrisburg to the north and Martinsburg, Winchester, and Roanoke to the south.[12] It is the shortest mainline Interstate in Maryland and contains the shortest portion of I-81 of all six states through which the Interstate highway passes. The Interstate was dedicated as Maryland Veterans Memorial Highway in 1987.[13] I-81 passes through the state of Maryland at one of its narrowest points, the "Hub City" of Hagerstown where it intersects with a large number of other routes, most notably I-70. The Hagerstown Regional Airport is served by this Interstate Highway.[12]

I-81 northbound at western terminus of I-78

I-81 forms a major north–south corridor through the state of Pennsylvania, serving the boroughs of Chambersburg and Carlisle, where it meets the Pennsylvania Turnpike (I-76) but does not directly interchange with it (motorists must use US 11 to connect). Around the state capital of Harrisburg, the route forms the northern section of Pennsylvania's Capital Beltway. The route then travels northeast toward the Wyoming Valley, where it serves the cities of Wilkes-Barre and Scranton, then heads north through the Endless Mountains region toward the state line. 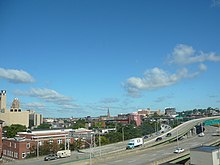 In New York, I-81 crosses the Pennsylvania state line southeast of Binghamton. The freeway runs north–south through Central New York, serving the cities of Binghamton, Syracuse, and Watertown. It passes through the Thousand Islands in its final miles and crosses two bridges, both part of the series of bridges known as the Thousand Islands Bridge. South of Watertown, I-81 closely parallels US 11, the main north–south highway in Central New York prior to the construction of I-81. At Watertown, US 11 turns northeastward to head across New York's North Country while I-81 continues on a generally northward track to the Canadian border. From there, the road continues into the province of Ontario as Highway 137, a short route leading north to the nearby Highway 401.[14]

KML is from Wikidata

Even though I'm not technically a virgin, I'm still very afraid of real sex for the first time. Therefore, be gentle with me. Member of Coline, despite her protests, has long been as elastic as rubber, and tough as flint, clearly longing for the same as Marie. The veins swollen with excitement and the delightful trickle of whitish grease that flooded the trunk and flowed onto the scrotum spoke.

Of Little Tate's thoughts better than any words.

After sucking it a little more, he stood up, deftly pulled off his panties with one hand, with the other he dipped it in Vaseline. He began to apply it to his anus. Having carefully pushed his lustful ass, he opposed the crustacean on the chair that stood opposite me.

looking at me over his shoulder, he wagged his ass urging my friend to visit there.

Apparently only then he realized that we are not interesting to the people around us. Well, you think some kind of slut walks with long bare legs, in summer you never know who dresses like in such. Heat. We even smoked a cigarette and apparently he got used to it and stopped looking around so excitedly.

It was getting light and the tights on me could show up, I had to get up and ask for time off, as if to go to the toilet. one of them understood everything and also followed me. The paid toilet was at a distance in the beach complex, but I rushed to the pine tree.