investing involves market risk, including possible loss of principal, and there is no guarantee that investment objectives will be achieved.

The Modern Soul of Lerebours Antiques 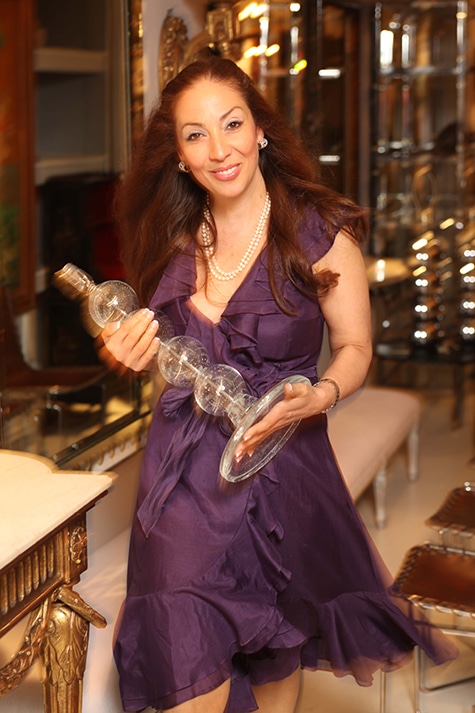 Cathy Lerebours, an antiques dealer for more than a decade and a bona fide glamour-puss, has just opened an antiques shop on New York’s swanky 60th Street — a veritable antiques alley between Second and Third Avenues, with dealers cross populated with old-time notions and sundry stores and the famous Serendipity Restaurant and Dylan’s Candy (after all, one does need nourishment after canvassing the dense mass of design shops.)

Deciding to go very much agains the tidal wave of business trepidation as the economy, particularly in Manhattan, threatens to continue its none-too-gentle decline, Lerebours says, “It was the perfect moment to act . . . and act quickly I did.” In a record-setting three weeks, she negotiated, signed and finished construction on the lease on the nearly 1,000-square-foot space in what was once a low-slung tailer shop. Fifty years of fine woolens and sewing machines gave way in a flash to Lerebours tantalizing merch. Before the ink was dry, she enlisted in the redesign of the mangy space. The BFFs ransacked Home Depot and the silk outlet stores on 39th Street and applied their trove and decorator skills until a true jewel box emerged.

Awash in six shades of gray and white, Lerebours Antiques is an echo of the French salon motif that was popular in the 1940s, with stand-out pieces including a lacquered dining table in the Maison Jansen manner, a pair of faux-painted 20th-century Directoire commodes and a French bar cabinet by Maurice Jallot. Lerebours says, “My taste is very eclectic but I tend to gravitate to pieces that are classically inspired.”

Lerebours is a native of the Dominican Republic who used her television talents (honed at Inside Edition and Univision) to create a real-life set that would be a perfect home for the Thin Man series. She dabbles with period finds as well as intricate pieces from her native country that include capricious seashell confections which she artistically transforms into lighting and furniture. Leaving television to travel throughout Europe and later, the United States, Lerebours landed in New York with an offer to enroll in an antiques associates program at Parsons, under the tutelage of the well-respected teacher (and certified decorative arts appraiser) Louise Devenish. An apocryphal auction at Tepper and some groovy goodies had Lerebours hooked — and off and running. 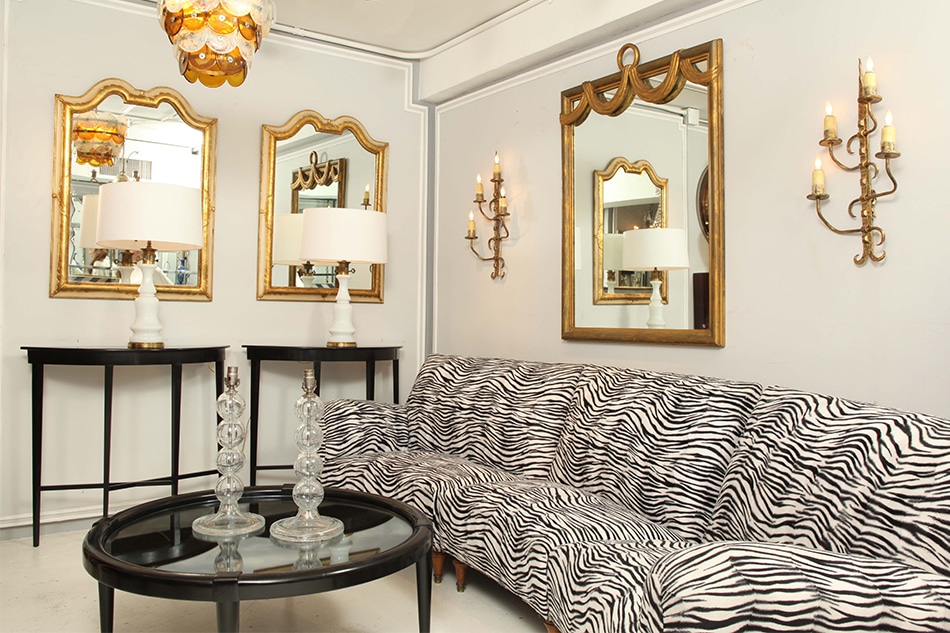 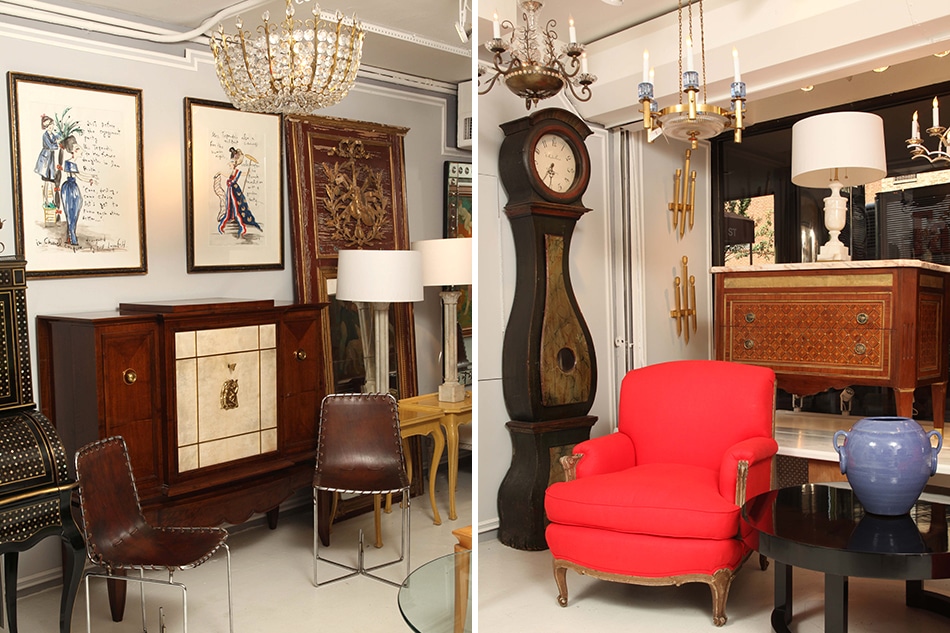 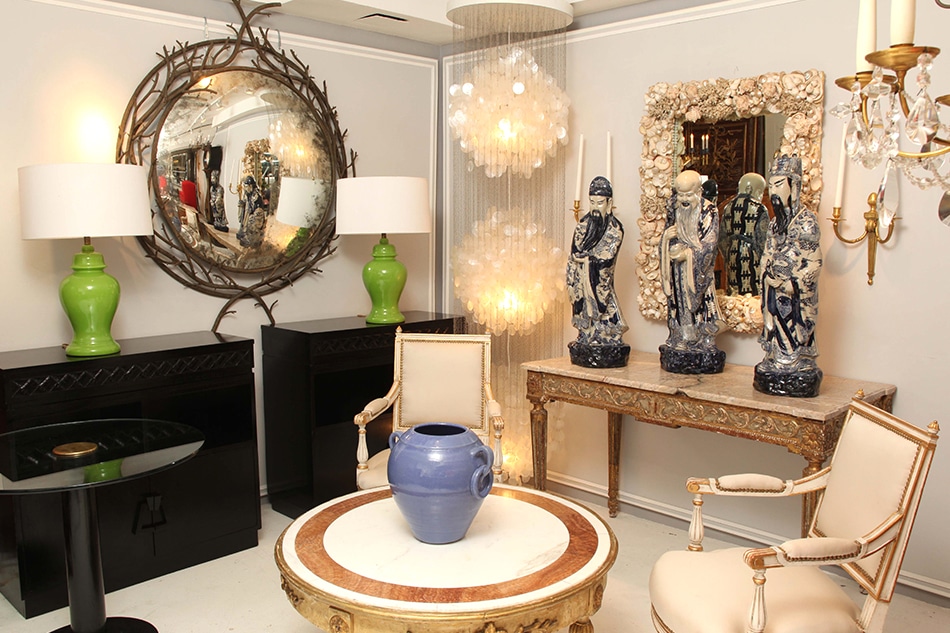 Selling her finds at the 26th Street Flea Market and constantly re-feathering her own nest on 60th Street further inspired Lerebours’s goal to open her own store. Laughing at the subject of starting a retail venture during a recession, she says “I am only looking forward. And with the likes of Samuel Botero, Bruce Willis, and Noel Jeffries dropping in at my shop — all of them offering lavish praises and compliments — I am flush with encouragement and optimism.”

The language of psychology is all-pervasive in American culture—from The Sopranos to Oprah, from the abundance of self-help books to the private consulting room, and from the support group to the magazine advice column. Saving the Modern Soul examines the profound impact of therapeutic discourse on our lives and on our contemporary notions of identity. Eva Illouz plumbs today's particular cultural moment to understand how and why psychology has secured its place at the core of modern identity. She examines a wide range of sources to show how self-help culture has transformed contemporary emotional life and how therapy complicates individuals' lives even as it claims to dissect their emotional experiences and heal trauma.

Eva Illouz is a professor of sociology at the Hebrew University of Jerusalem and a member of the Center for the Study of Rationality. She is also the Academic Director of the Program in Cultural Studies. She is the author of Consuming the Romantic Utopia: Love and the Cultural Contradictions of Capitalism (UC Press; honorable mention, Outstanding Contribution Award, American Sociological Association, 2000); The Culture of Capitalism (in hebrew); Oprah Winfrey and the Glamour of Misery: An Essay on Popular Culture (Best Book Award, American Sociological Association, 2005); and Cold Intimacies: The Making of Emotional Capitalism.

“Eva Illouz is a great scholar, and her book has been hailed by many as an important contribution to the field of therapeutic discourse.”—Feminist Review

“[An] important reference point for understanding the nexus between self and culture. . . . Deserving of a wide readership.”—Theory & Psychology

"A tour de force of critical insights and broad scholarship that provides a rich banquet of ideas for those interested in a broader understanding of the modern soul. It is one of those rare books that forces the reader, whether he agrees or disagrees, to think in new and creative ways."—Charles W. Smith, author of Success and Survival on Wall Street

"Eva Illouz has made another seminal contribution to cultural sociology. Forty years ago, Philip Rieff announced the advent of a new 'therapeutic culture' wherein self-realization, once achieved as a byproduct of commitment to a communal purpose, is pursued as an end in itself. How the therapeutic culture affects selfhood, on the other hand, has remained a mystery. To clarify the matter, Illouz shows how therapeutic values insinuate themselves into the corporate world, the state, mass media, civil society, the family, and the bedroom. Eva Illouz has given to our generation the fullest and clearest account of therapeutic individualism ever written."—Barry Schwartz, author of Abraham Lincoln in the Post-Heroic Era

"Located within a cultural history of introspection, Eva Illouz has given us a highly original treatise-a cultural critique-of therapeutic discourse as one of the principal historical formations, languages, and codes that both articulate and shape what modern selfhood is today. An important work in cultural sociology and the sociology of emotions, Illouz will change many of our ideas about the emotions and late capitalism."—E. Doyle McCarthy, author of Knowledge as Culture: The New Sociology of Knowledge

Acknowledgments
1. Introduction
Cultural Sociology and the Therapeutic
Therapy as a New Emotional Style
Texts and Contexts
Cultural Critique and Psychology

2. Freud: ACultural Innovator
Psychoanalysis as a Charismatic Enterprise
The Social Organization of Freudian Charisma
Freud in America
The Freudian Cultural Matrix
The Romance of Psychology and Popular Culture
Conclusion


3. From Homo economicus to Homo communicans
Emotional Control in the Sociology of Organizations
The Power of Control and the Control of Power
Psychologists Enter the Market
ANew Emotional Style
Emotional Control
The Communicative Ethic as the Spirit of the Corporation
Emotional, Moral, and Professional Competence
Conclusion

4. The Tyranny of Intimacy
Intimacy: An Increasingly Cold Haven
Beyond Their Will? Psychologists and Marriage
What Feminism and Psychology Have in Common
Intimacy: ANew Emotional Imagination
Communicative Rationality in the Bedroom
Toward the Ideology of Pure Emotion
The Cooling of Passion
Conclusion

5. Triumphant Suffering
Why Therapy Triumphed
The Therapeutic Narrative of Selfhood
Performing the Self through Therapy
ANarrative in Action
Conclusion

6. ANew Emotional Stratification?
The Rise of Emotional Competence
Emotional Intelligence and Its Antecedents
The Global Therapeutic Habitus and the New Man
Intimacy as a Social Good
Conclusion

7. Conclusion: Institutional Pragmatism in the Study of Culture

A modernized approach to meditation that will appeal to anyone, even if - especially if - you believe you have no time, you can't sit still, or that it's just not you.

Whether you're a Fortune 500 CEO or someone bogged down with a never-ending to-do list, the proven secret to being more effective and living a happier, healthier life is to hurry up and slow down, to unplug. Studies show that you can get more done - and do it better - by doing less, just by consciously unplugging for a few minutes each day and meditating.

This revolutionary book by the founder and CEO of the groundbreaking LA-based meditation studio Unplug Meditation brilliantly simplifies this powerful practice and shows the overwhelmed and overworked how easy it is to unplug in order to relieve stress, regain focus, and recharge.

Schwartz debunks the common misperceptions about meditation, including the notion that you need to sit still for long periods of time, or that you need to turn off your brain. She also shares the life-changing benefits you will experience, the proven science of how meditation literally changes your brain, as well as easy techniques and tips to easily incorporate meditation into your daily life.

"Unplug reinvents meditation for today's distracted, stressed out and technology-besieged world. It's the book I wish I had when I first started meditating. Simple, smart, and inspirational, it provides concrete tools you can use to live a more fulfilling, happier, and yes, more productive life."
- Arianna Huffington, bestselling author ofThe Sleep Revolution and Thrive

"Unplug is the ultimate guide to meditation and its powers. Suze Yalof Schwartz expertly demystifies the essence of meditation, and how to achieve the revelatory rest, your mind and body need, to live a healthy and long life."
- David B. Agus, M.D., bestselling author of The End of Illness and The Lucky Years

SUZE YALOF SCHWARTZis the founder and CEO of Unplug Meditation. For decades she was a fashion editor, director, and stylist at Vogue, Elle, Marie Claire, and Glamour. She has appeared on Today, Good Morning America, The Early Show, and The View, as well as The Oprah Winfrey Showand CNN.
Sours: https://www.target.com/p/unplug-a-simple-guide-to-meditation-for-busy-skeptics-and-modern-soul-seekers-hardcover-suze-yalof/-/A-52149778

There is nothing better than soulful, emotional and top-shelf quality vocals to take your new production into new heights! Welcome to Purple Fog – Modern Soul Vocals!

Purple Fog will take you through those hazy feels, with soulful vibes and pristine female vocals sung straight from the heart. Melodies that catch the ear are hard to come by, but this library is full of them. Inside you will find vocal hooks, ad libs, chops and layers, all neatly organized for ease of use. Alongside all these sections are One Shots, FX, and Phrases. This is the perfect sample pack for producers making Lofi, Soul, RnB, Hip Hop, Pop, Funk, and so much more!

So what are you waiting for?  Smell the beautiful perfume of Purple Fog – Modern Soul Vocals!

Only logged in customers who have purchased this product may leave a review.

Taking out two very small clasps from the box, Mom alternately snapped them on the collar in front and on the bra in the back. "Where are the keys to them, mamma?" "And this is where" mamma showed me the key to the very first and largest lock. From the handle of the large key, two more small keys departed at an angle of 90 degrees.

And then I noticed between the cups of my new bra a strange chain made of the same metal as the clasps.

Yes, I will not tell anyone, and then you will delete the recording from the cameras yourself. Come on, please me, like a neighbor. '' I started rubbing against his face and immediately finished, out of habit. He nevertheless threw me off of him, and then tried to grab me.

Apparently, in bandit fights, it is not customary to make grabs with the legs behind the head, and for some reason he immediately stood up.